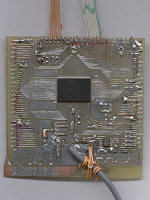 The EZ-USB board last mentioned on this blog in Yeah! was built a while ago. Even used some of the board art as the background to this blog. But I did not post the build logs because I must have been clicking the wrong button all along.

Oddly the most arguious part of this build was getting the PCB made. There was a miscommunication and I misunderstood that the PCB design would be sent out after my boss 'did something' to the Eagle files. That never happened, instead when I went to collect the PCB I received a blank piece of photo-sensitive board and a (discount brand) transparency sheet.

In the time since I last made a board by photoengraving we had installed a new experimental etching process. A year ago we diped the boards in heated baths of feric chloride (etchant) with an array of aquarium air pumps to provide circulation. Now we had a metal cage that holds the blank PCB in a small container with twice as many aquarium pumps blasting the etchant onto the PCB, no heater. This is partly because disgruntled jokers kept bypassing the automatic shutoff and leaving it on over the weekend, but mostly because when the etchant is opaque this still will etch a board in a couple of minutes.

My lack of familiarity with the new arrangement meant that it once I had the pattern printed onto the transparency (which was unexpectedly difficult due to network problems) it took four attempts to get a useable board.

It seemed to have etched nicely when I checked it after three minutes, however when I did extract it there was a long scratch across the board that cut through rows of wires. These had to be bridged using wires, dozens of them.

There were dozens of vias too since the original design called for the lines to be brought out in signal rather than pin. These were connected using wires, dozens of them.

The vias that would be concealed by the main IC would also have allowed easy rework if the IC was off its mark. These also are to meet for specific power requirements. The new plan called for the 24 gauge wire to form a platform under the IC and bending the pins down to the board, a baker's-dozen wires, and a hundred pins.

After disturbing much of the fancy repair work I'd done earlier it seemed likely that the IC would not have enjoyed this much heat so etching another board and using 30 gauge FFC instead seemed more reasonible than continuing.

Being very careful not to scratch the mask I photo-developed another board and then used a Sharpie 'industrial ink' pen to draw in the details that didn't turn out, put it into the etchant and watched.

After a few seconds it became clear that the board was not being etched evenly, and I very gingerly repositioned the board when the definition of the traces were clear in one patch, but not the rest of the board.

Eventually it became clear that part of the photo-mask was eroding but other areas were not etching. This was probably due to a combination of uneven circulation of the etchant and contamination of the board. (my colleagues were eating fried chicken and also making PCBs for their own projects) TO fix this I tried to cut the copper between traces w/ my knife and return the PCB to the etchant. This did not result in the copper being removed after a couple of minutes. So I removed the board to try again, at which point a bit of the vynil I had used to hold the board to the cage brushed against it and removed part of the normally acid proof mask.

After decling to go to the pub with my friends/coleagues for lunch (which I regret) I tried again.

This time thoroughly cleaning all of the equipment and replacing the photo-developer solution, to eliminate contamination. Collecting a fresh blank PCB to avoid mask voids where air has leaked in and eaten it away. Over exposing the board to make absolutely certain that not even an invisible trace of the mask remained. And finally resolving not to handle the board once it was in the etchant.

This did not work.

While I was working through the chicken my friends had left me the board was buffeted against its cage and recieved many scratches. And the over exposure caused many defects. All of which would require hundreds of wire bridges to repair.

Fail #2: the sequel
Not anticipating any greater success with the current pattern, I went ahead and tried to repair these boards and if another PCB is to be made in the same manner than a new design would be used, one that is single sided and not 'consumer ready'.

I drilled the hundreds of vias/pads by hand before heading home where I pre-soldiered the entire surface of both boards to eliminate any small break. Used the CAD files and my knife to carved every single line that did not etch from Fail #2 out of the copper cladding. Used a desklamp and a marker to highlight the dozens of breaks in the pattern.

Fail #0:
Back at work the next day I tinned a fresh chip, and positioned it on Fail #1;

It did not fit.

I did check the fit on a plain piece of paper; but the transparency was clearly out of scale when I lay it ontop. Want to know how was this was possible?

We have a mix of Win9x, Win2k, Mac and Linux machines, and everyone outright owns their own machine in addition to the pool of machines provided. We also for baffling reasons don't use printing permissions, so often times someone in one department will try printing to the first printer they see on the network, instead of the one they are sitting next to. And when that doesn't work they try printing again. Then when that fails they try another printer at random. And when that fails they try the first one again. ...

Now this wouldn't be an issue if we didn't have seven printers in on the main print server workgroup and another fourty in various offices. My lab's printer is the first one on the list so it is often out of toner and paper, or getting stuck when someone ques to print A4 and it only has letter and A3. To combat this IT has set the print server to always override print-settings to use HP's 'econo-mode' if a user prints twice to the same printer within a 30 minute window. 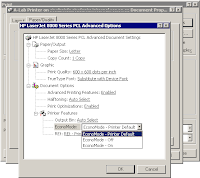 Econo-mode itself is actually quite clever. It applies a gradient to dark areas so that the edges that the human eye follows are clear but less toner is used in the middle. And the page is scaled vertically by 5-15% depending on the amount of toner used on each line, tightening line spacing and saving even more toner. All of which does not negatively affect human readable text and graphics.

But my work is technical. A 5% distortion is enough to put a sliding rule graph out by an entire order of magnitude. And even regular scaling to a PCB prevents pieces from mating, printed component to be incorrect values, IC pins sitting onto the wrong pads, header pins not fitting without breaking.

At this point I cursed and redesigned the board and stayed late to finish building the board. 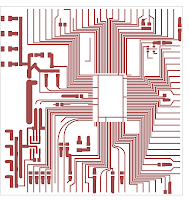 Redesigning this board a fifth time has allowed me new insight to its design. This iteration brought the board to approximately the size of a floppy disk, and there was no real need for it to be breadboard sized, and the whole peripheral plan was a bit half-baked. As a 3.25" double sided board it would have sufficient space to bring two rs232 transceivers and keep the extra leds and buttons. I've never seen a user plus the original into a breadboard and build their circuit next to it anyways, it's always three boards, one for each edge and one for the circuit.
Now it's one plus the double sided 3.25".

The tie in: product placement.
The SSD mentioned on this blog in Cloning for fun or profit can be reduced to four chips, this SoaC, voltage-level converter, power and SRAM. And the sweet part is that now the medium for loading/unloading data from the XT/AT can be a USB cable, and users can expand the capabilities of this card using software.

There are a few more posts to summarize about acually programming this chip, but I will continue that in a later post.
Posted by Darren at 2:42 PM