A dear friend of mine has passed away.
We'd often made potentially career ending bets that I'd do some incredible thing (instead of the conservative assigned duty) and my friend would keep admin off of me long enough for me to pull it off.
I've felt fustrated not being able to celebrate completion of the last bet, esp. with ideas for the next.

But this has given me food for thought whilst I wait for parts to arrive for my other projects. I've made many similar (though less damning) bets with other friends, and I'd hate to see them gone before I've finished.

This PCB is for one of my friends who is a NES freak.

This (surviving) friend has [reportedly 1 dozen of the] 'original' controllers that are so badly worn that even the repeated application of a chemtronics.comrubber key repair kit does no good since it the PCB and/or the plastic caps that have completely worn away.

For a laptop I bet that I would produce a replacement controller from a broken NES controller. This controller would either precisely match the original and use the same case, or it would be clever and be far more ergonomically correct.

I got the laptop within a week but my friend has never sent me a broken controller. I have never had a NES myself. And years later, I've now decided to search the internet and see if I can find the information I need to make a replacement PCB for the NES controler. I first tried working from the photo on slagcoin.com but was disappointed by the insufficient 0.05" resolution I'd achieved in the result. I believe that I miscalculated the trapezoidal transformation.

Rather than repeat the process I searched again using a number of premutations and eventually found an x-ray on flickr.com that was perfect; No distortion, square and true. All I had to do was measure and scale.

Since I have no 4021 I am unable to build this circuit today (without ordering parts). The CMOS 40xx series of IC has been displaced by the TTL 74xx series. If I needed to I would need to make an extra a 74xx design based on what parts I have on hand. This extra design would also make sense if my friend has lost the original PCB or wants to make a spare. 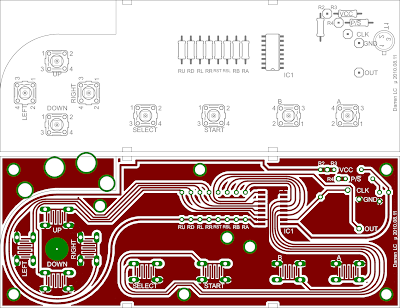 Hi there, good work! Could I get a pcb design file (is it in eagle?). thank you, Ziga

did you also make a SNES version? Could you send the Eagle files to me as well? I would really appreciate that.

Hi, iam also interested in the eagle Files. Ist possible to get them?

Hey Meow, is there a repo where I might be able to find this PCB design? I'd like to make some BLE controllers using the original (and far superior) mechanicals!

Any chance of getting the eagle file?

Hi, is there a pcb file that is available for this?